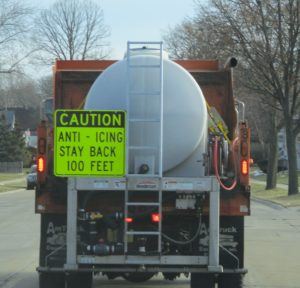 The South Milwaukee Street Department will begin to use a salt brine solution on our roadways this winter. Salt brine is a solution of salt (typically sodium chloride) and water. It has a freezing point lower than pure water and, as such, is a useful tool in reducing the adhesion of snow and ice to road surfaces. The use of salt brine is considered to be an anti-icing proactive taken to decrease the likelihood of snow and ice bonding to the pavement surface. Anti-icing involves placing a layer of brine on the surface of the pavement before the winter storm has begun.