In 1830, government surveyors set up townships six miles square. The first settlers to this area faced difficult decisions on how to get here. The Erie Canal allowed access to Lake Michigan, but the harbor at Milwaukee was primitive, requiring a treacherous upriver trip on the Kinnickinnic River from its mouth at the lake to the inland harbor. Often, ships were unloaded onto smaller boats because of difficulty maneuvering the harbor entrance. Milwaukee was not yet a city. It consisted of three competing villages: Juneautown, Kilbourntown and Walkers Point.

The Chicago Treaty of 1833 gave the U.S. government land from the lower tip of Lake Michigan and east of Lake Winnebago. Settlers, particularly easterners, were anxious to acquire property.  Government surveyors divided the land into one mile squares, each containing four 160-acre “quarter sections.” Sales were typically made in these quarter sections at a minimum bid of $1.25 per acre.

Both John Fowle and Elihu Higgins built mills along the Creek. Earliest maps show Fowle at the mouth of Oak Creek and Higgins Inn at the intersection of the Military Road and what is now Hawthorne Avenue. John Fowle operated his mill until 1867, when it was bought by Charles Ahrens, who would remodel it, installing a Leffel turbine to improve production from 25 to 50 bushels per day.

Milwaukee County government separated Oak Creek Township from Lake Township, permitting the first meeting for the purpose of electing supervisors of Oak Creek Township. This occurred in April 1841; no record of the number of voters exists, but in the 1842 meeting 43 votes were cast. At the Township of Oak Creek organizational meeting in 1842, leaders of the township were elected, and Luther Rawson was appointed to use “all necessary power” to keep dogs from disturbing future meetings at the schoolhouse. John J. Mason was also elected as Constable and Collector.

In 1854, the Chicago and North Western Railroad built tracks through the township and erected a depot on Rawson Avenue. A few years later the depot was moved to its present site near 11th and Milwaukee Avenues. What is now Cudahy, to the north, was called Buckhorn in the 1800s and the Buckhorn Station was located on the Military Road near the intersection of Whitnall and Grange Avenues. Lamberton station, or County Line station, was located at the far southern end of the township or just across the county line in the Township of Caledonia. Farmers could use this rail service to ship grain or receive equipment and supplies ordered for delivery to their nearest station.

In 1856, the first of two Cream City brickyards were started by Joe Dibley and Horace Wells, located west of Lake Drive and Oak Street on the Dibley/Wells farm area, which is the Seven Bridges Area today. In 1870, Horace Fowle and Horace Wells joined to run the brickyard at the mouth of Oak Creek, as clay from the Lake Michigan bluffs fired into the cream-colored bricks, which were a very popular building material in the area. Related immigrants from England, John Fowle, a miller; Joseph Dibley, a carpenter turned farmer; and William Sivyer, a stone mason, worked together. Sivyer carved the millstone and stayed with the Fowles the first winter, while Dibley worked for Solomon Juneau as a carpenter for three years before buying a farm at the north end of Grant Park. Sivyer’s last job before he retired was to build St. John’s Cathedral in Milwaukee of Cream City brick.

A world-famous singer, Emma Abbot, was the daughter of the music teacher in the township of Oak Creek in 1868. She studied vocal music in New York City and started a traveling musical theater group that toured the United States. She died of pneumonia at age 41, as the richest woman in America. She also sponsored medical ships for immigrants in the New York harbor.

The early churches in the township included the First Congregational United Church of Christ (1854), St. Mark’s Episcopal (1864), St. Matthew’s Catholic (1839), and St. John’s Evangelical Lutheran (1843). Some settlers attended services at St. Stephen’s Catholic Church (1847) in New Coeln, an unincorporated village located just north of College Avenue on Howell Avenue. The only visible sign of the village of New Coeln today is “The Landmark Inn,” a tavern built in 1850.

From Village to City

From 1840 to 1890, this was primarily a rural area. However, in 1890-91 a group of Milwaukee businessmen, land speculators and bankers decided to create a new industrial area south of Milwaukee. The promoters liked the railroad and Lake Michigan access, and the commerce existing at the intersection of Hawthorne Avenue and Chicago Road. It was called the village of Oak Creek, but was not incorporated. They began to solicit purchase options from the local farmers. Some of the farmers were original settlers, and being much older were ready to retire. Upon obtaining adequate options, the speculators formed South Milwaukee Land Co. Inc., exercised the options and began soliciting manufacturers to start businesses or move businesses to the area.  Inducements in the form of free land or cash or both were sometimes offered. By 1890, more and more settlers began to come to the village on Lake Michigan near Oak Creek on the Military Road. The main village center was around Hawthorne Avenue and North Chicago and Rawson Avenues. Most people walked to work.

Land was not inexpensive as the village grew; some plots were selling for $100 to $200 per acre, a figure that rose again to up to $1,000 per acre as more industries moved to this marvelous new town between Milwaukee and Chicago. It was an excellent location just six miles south of the City of Milwaukee and on the main line of the Chicago and Northwestern Railroad.

In 1892, surveyor E. M. Spalding was hired to create a legal description of the area between College Avenue, Pennsylvania Avenue, Drexel Avenue and Lake Michigan. A census of this area showed 517 residents. In December, 1892, the citizens applied for incorporation with the state of Wisconsin and the Village of South Milwaukee was established. Population grew quickly. By 1897, there were 2,662 people in the village, allowing the village to apply for city status.

Thus, the City of South Milwaukee was born in 1897, with George C. Bush elected as the city’s first mayor that same year.

South Milwaukee also has its place in aviation history. National known aviation pioneer and visionary Alfred Lawson, who built the world’s first airliner, worked on his second and larger aircraft in South Milwaukee in 1919 and 1920. Unfortunately, the plane crashed on its initial flight on May 8, 1920, but his legacy lives on. Lawson conceived of the “hub” system of airline connections, a system that is still used today. Continental Faience and Tile Company used the former Lawson factory at 909 Menomonee Ave. from 1923 to 1943, making artistic, hand-manufactured tile known throughout the United States. That tile remains in hundreds of public buildings, apartments and homes in the area. Both of these firms, whose buildings were on the National Register of Historic Places, disappeared when the site was demolished shortly after the turn of the 21st Century.

A single company embodied the city’s manufacturing heritage more than any other. The founders of South Milwaukee envisioned an industrial city, south of Milwaukee on Lake Michigan with a railroad running through it and plenty of affordable and available land. They sought companies to fit that vision and, in doing so, turned their sights more than 300 miles to the east.Bucyrus History 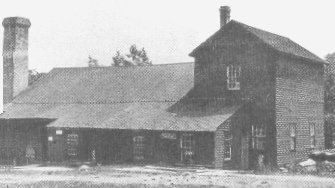